Major Matthew J. Gatti was a first generation Italian American, who was raised in a Catholic orphanage during the great depression.At the age of sixteen Mr. Gatti joined the United States Army. He become the U.S Army's South Pacific light weight boxing champion from 1933-1936. Mr. Gatti was quickly promoted into the Air Force, and during World War II become a successful commanding officer. After the war ended Mr. Gatti would produce shows for the enlisted men throughout Europe and the United States.
During his busy military career, he married and had two daughters.  Being stationed in Italy, Germany, and France gave the Gatti family a great understanding of the Arts. After he retired, he settled in California and founded (in 1963) the American Continental Circus and the Canadian International Circus. Later these two shows would become what today is Circus Gatti.

During his lifetime, Major Gatti developed lasting relationships with sponsors that still carry on today. He would give back to communities by donating tickets to underprivileged children and families.Often he would donate the circus to hospitals, Indian reservations, military bases and even state penitentiaries.
He was also known for his generosity by personally giving monies to charities, individuals or just lending a hand.

Going on 50 years, Circus Gatti is still led by Major Gatti’s vision of bringing enjoyment to children, family bonding, and giving back to our community. 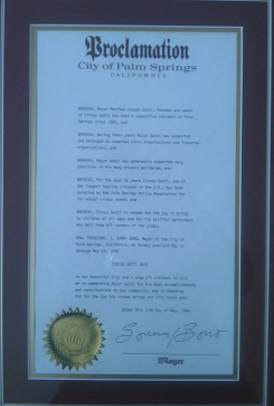